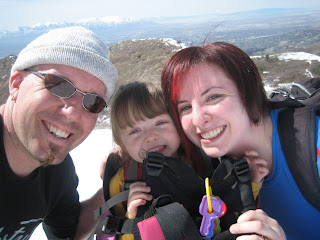 I first met your mom in the kitchen of an apartment I shared with two roommates, Adam and Joel, in Corvallis.

I don't have the best memory in the world, but I remember that moment vividly.

She was wearing a pink sweater and black pants. He shoulder-length brown hair was pulled into a single ponytail. And she had the most striking eyes — one significantly more green, the other significantly more blue — I'd ever seen.

Just one problem: She was dating Adam.

Over the next few weeks we got to know each other, usually while waiting for Adam to get ready for their dates. He always seemed to take a really long time. And I didn't mind that one bit.

While she waited, we chatted. And while we chatted, we might have even flirted a bit.

And why not? She was funny and sassy and confident and intelligent. Absolutely beautiful. And while it seemed that she and Adam were having a good time together, it never seemed that their relationship was destined to be more than a college romance.

I learned that she was a local girl – she lived in north town with her parents. She learned that I was a bit of a cad — after a long relationship had gone sour, I was... um... exploring my new-found freedom.

I was getting close to graduation. She was in her freshman year. We both needed to take an astronomy class — and we agreed to take it together. At least, we reasoned, we'd have something to talk about when she was waiting for Adam.

Then, one day, Adam came home and told me that they'd broken up. No big deal, he said. They just weren't meant for each other.

And I started counting the days until our astronomy class began.

It didn't take long for me to convince her to ditch class...

... first for lunch at the New Morning Bakery, where we sat next to one another and she glibly mocked my vegetarian diet ...

... next for a picnic at Avery Park, where we shared strawberries and a bottle of wine and watched the Marys River trickle by.

I liked her. She liked me. But I was, I admit, a little standoffish. She knew I'd recently been seeing several women — and I didn't want her to think that she was just another one of the bunch.

Then, one evening, we took a stroll through her neighborhood and wound up facing one another on a sliding platform in the playground at her old elementary school.

I leaned forward. She did too.

I've shared a lot of great kisses with your mother, but none so soft and tender as that one. Ten years it has been, and I can still feel the wetness of her lips. I can still hear her stuttering breath as I touched the back of her neck. I can still see her coy smile as we parted.

It was only a matter of weeks later that we were living together. And just a matter of months before we were engaged. We were married in your grandparent's backyard on a stunning August night.

Ten years, we've been together. And while things are not always perfect — nothing in life is perfect, you see — I wouldn't change a thing.

Because out of that first meeting, there was a spark.

And from that spark, there was a kiss.

And from that kiss, there grew love.

And in that love, a family began.

No, nothing in life is perfect. But I couldn't imagine how it could be any better, either.

Ten years it's been. And I wouldn't have it any other way.

Your mother called today with the good news: "She got into Highland," she said.

I might as well have learned you'd gotten into Harvard.

There weren't many openings at the preschool we'd chosen for you, but just the same we really weren't looking anywhere else. This school — mostly for the children of Salt Lake School District employees — seemed to have the right combination of location, curriculum and price.

We sat you down in the hallway to tell you the news.

You jumped for joy. I beamed with pride.

And then I went into my room and cried.

For nearly four years you've been my little partner at home. It hasn't always been easy, but we've played games and taken walks. You've gone with me on assignments and waited patiently for me as I've hurried through my writing chores. We've read books, watched movies, made cake. We've spent entire days at the park, in the mountains, at the pool.

Well, not for a few months more, at least.

So here it is: The last hurrah. You and me, kiddo. And, oh my, how we're going to make the best of it.

He's got long blond hair and a devilish smile. And the other day he came rolling up in a PowerWheels Jeep.

"I just got a new car," he yelled out from across the street. "Want to go for a ride?"

Suddenly, your mother says, the future flashed before her eyes. Someday, she realized, some good looking young person is going to pull up to our home in a real car, rev the engine a few times for good measure, and invite you for a ride.

But the way I see it, you've got two choices in life: You can accept the future or you can't. And either way, the future is coming — or it's not, which is really not a very good outcome. So I've come to terms with the future, and much of what it entails...

There will be parties. And concerts. And dates.

And inevitably you'll want to wear something that I don't want you to wear.

And inevitably you'll want to do something that I don't want you to do.

I also know that you'll not always make the decisions that I would wish for you. About all your mother and I can do about that is try our damnedest to give you the confidence, morals and support it takes to make good choices in hard situations.

And I know you will. Mostly.

As for all those other times...

Today is St. Patrick's Day. And although your ancestors came from all over this big, green earth, the biggest piece of 'em came from one big, green island.

You're Irish, kid. So today is your day.

Or something like that. Truth is that St. Paddy's is for everyone. That's what I really love about it. Each year on March 17, it doesn't matter if you're black, brown, white or whatever — so long as you're wearing a bit o' green.

Still, your heritage gives you the right to be particularly proud on this day. I think that's OK. It's good to be proud of who you are and where you came from — just so long as you share it equally with everyone.

I always said I'd go down with the ship. But the ship is sailing on. And, it would appear, it is doing so without me.

After a decade of chasing scoops and beating deadlines, I'm leaving my job as a newspaper reporter.

The reasons are myriad, but not all that complicated. I love what I do and would be very pleased to know that I could do it for the rest of my life. But the future of the newspaper industry is murky, at best. More than 30,000 newspaper employees in this country have lost their jobs in the past three years. Hundreds of papers have stopped the presses.

So yes, I knew the waters would be rough.

But damn the torpedoes, I said. Full steam ahead, I said.

That was before you came. I've always been willing to go down with the ship, but I'm not willing to bring you down, too.

And thankfully, I knew something:

The year after his paper closed, your grandfather helped bring the World Cup of soccer to the United States. Two years later, he helped found Major League Soccer (we benefited from his hard work just the other night when we watched Real Salt Lake defeat the Columbus Crew 4-1.) When he'd seen enough of the ugly side of the beautiful game, your papa bounced back into the newspaper industry for a few years before finally landing in the New Haven Unified School District, where he helps keep students, parents, teachers and administrators connected to their schools and to one another.

At every step along the way, he found purpose and satisfaction and joy.

And so I knew that I could too — no matter the ship on which I sailed.

Since shortly after you were born, I've been working toward making a transition from journalism to teaching. And today all that work came to fruition. I have accepted an offer to become an assistant professor at Utah State University.

The job comes with a lot of great benefits — not the least of which is the time and freedom to continue to commit acts of journalism. Yes, I'll be keeping my toe in those rough waters.

But the new job also comes with some sacrifices.

For the past three years, I have been blessed with the ability to work at home, with you by my side. It wasn't always easy to juggle my duties as a father with my duties as a journalist, but you helped me make it work. I would not trade the time we spent together for anything in the world.

Next year, you'll go off to school — and I'll be commuting to a job that is 90 miles away from our home. The department chair has pledged to help me arrange my schedule in such a way that is conducive to being both a good teacher and a good father and husband. I'm so grateful for his support, but it's still safe to say that there will be days that you and I won't see much of each other, if we see each other at all. That's going to be hard for me.

The trade-offs are weekends without the prospect of breaking news. School holidays. Summertime.

And, yes, a little bit of security.

That's not to say that these waters couldn't get rough, too. They very well might. But, at least for now, we sail on smoother seas.

Links to this post
Labels: advice, challenge, change, decisions, jobs, journalism, work
Newer Posts Older Posts Home
Subscribe to: Posts (Atom)
I'm a father. But 12 years into this, I still feel like such a child.
Still, there are a few things I know — things I'd like to share.
These are my letters — my admonitions and admissions — for my daughter.
Yes, I call her "Spike."

Get "Dear Spike" by e-mail