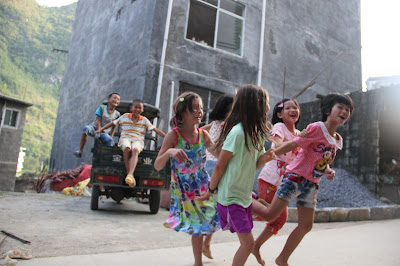 We've been back on our home continent for several days now, and back in our own home for two, but we're all still having trouble adjusting to our home time zone.

We started our adventure in Salt Lake City back in mid-June. We flew to San Francisco, then South Korea. Originally we'd planned an afternoon layover there — just enough time to get into Inchon for a bite to eat — but the airline had other plans for us. We had just enough time to get through security and onto our next flight. That was unfortunate — I would have loved to introduce you to South Korea and help you add a stamp to your passport. Still, there's time. If you'd like to go there someday, you can.

We were in Beijing a few hours later. The rain had beaten us to the capital and left behind a beautiful blue sky. You probably don't realize what a rare treat that was. Trust me: It was.

The next morning we were on a flight to Nanning. From there it was a five-hour drive to our final destination: a small village in a tiny valley flanked on either side by pyramid-shaped mountains, greener than I could possibly describe. The village, called Bapan, has come to be known in China as The Longevity Village.

By the end of this summer, I'll have finished co-writing a book on this remarkable place, which has one of the largest populations of centenarians anywhere in the world. That's what brought me there, but not what brought you and your mother there.

You were simply there to have an adventure.

Hiking over a rickety foot bridge. Swimming in the waters of a perfect mountain spring. Touring the countryside in the back of a motocab. Wandering among the stalactites and stalagmites of the endless local limestone caves.

You made friends with some local children. They taught you a new song. You taught them to play hopscotch.

You went on morning hikes with your mother and worked your charm on the local villagers.

Your Mandarin wasn't perfect, and you were much more timid about bringing it out than you were when we last visited China, four years ago. Still you hailed our cabs and ordered our food and bought our tickets and bargained with shopkeepers. You done good, kid, and we'll keep working to get you more comfortable with this very challenging language.

To what end? Maybe none at all, quite frankly. Mastery of a second or third language used to really mean something. Today we are perhaps a few years, if that, from portable and affordable simultaneous translating technology. Still, there is glory in learning anything and beauty in learning a language, in particular. And, as your mother notes so often, "more languages means more friends."

You did wander off at one point. You were with some other children and couldn't find us to ask whether you could follow them where they were going, so you simply decided to go. You were spoken to sternly. You cried and apologized profusely. You didn't try to deflect blame. You accepted responsibility. That was absolutely the worst of it. In all other times, in all other situations, in all other ways you were an absolute joy to travel with.

All of which tells me that we'll quite likely get do this again.

Maybe back in China. Maybe Ethiopia. Maybe Ecuador. Maybe Cambodia. Or heck, maybe we'll finally get out of the airport in South Korea.

Where will we go next? Who can say? Such is life for global travelers.

And you are most certainly a global traveler.

Links to this post
Newer Posts Older Posts Home
Subscribe to: Posts (Atom)
I'm a father. But 13 years into this, I still feel like such a child.
Still, there are a few things I know — things I'd like to share.
These are my letters — my admonitions and admissions — for my daughter.
Yes, I call her "Spike."

Get "Dear Spike" by e-mail